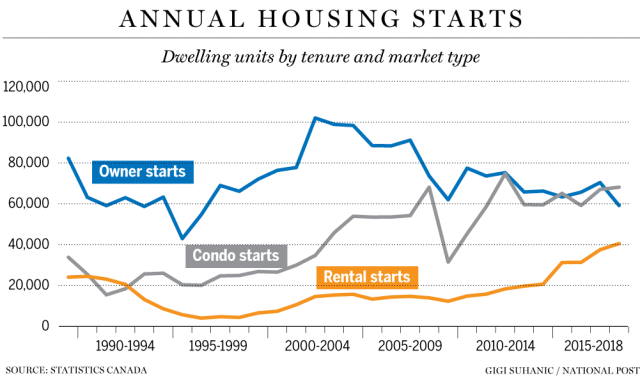 One in three Canadian households lives in a rental unit. In populous municipalities, the fraction increases to one in two.

Yet rental housing remains a sidebar in the housing narrative, which focuses overwhelmingly on home prices and mortgage rates. As homeownership continues to slip out of the hands of younger cohorts due to rising prices, renting remains the only viable alternative.

The rental situation was not much different in Toronto. However, in Montreal, Canada’s largest residential rental market, vacancy rates in October 2018 declined by 33 percent accompanied by a four percent increase in average rents (YOY).

However, purpose-built rentals offer tenure security that is missing in rented condominiums where a landlord can, at their discretion, withdraw the unit from the rental market.

Housing experts believe that the supply of rental units dried up in the seventies because of two changes in public policy. First, oft-cited rent control (vacancy decontrol) regulations by various provincial governments, introduced initially in the early seventies, is believed to have dissuaded investors from rental markets.

The second public policy change involved the federal government introducing the capital gains tax, which was also applied to purpose-built rental properties. And since the tax is applied to nominal values, a landlord is expected to pay taxes on nominal and not a real increase in property values. In times of high inflation, the tax will have a significant adverse impact on profitability.

The Canadian Federation of Apartment Associations, an industry group representing the private residential landlords who own or manage approximately one million rental units, have put these concerns on the agenda for their next annual meeting to be held in May in Toronto.

John Dickie, the Federation’s president, believes that all tiers of government have to make changes to ensure renting is a healthy and a viable housing alternative for Canadians. He believes that the feds must reform the tax policy for rental buildings so that the capital gains tax does not continue to be a deterrent for investment in rental housing.

“The provinces and cities need to look hard at development charges, delays in planning approvals, and rent control restrictions. Those are the most important factors holding back much-needed purpose-built rental supply,” Dickie said.

There is some good news on the rental front. The past few years have seen the beginnings of a resurgence in rental housing construction. Starts have accelerated to the extent that in 2018 rental starts were twice the number recorded in 2014.

Low rental vacancy rates and rising rents in the recent past have started to attract new investment in rental housing construction. However, waiting for rents to rise to send a signal to investors might not be the best public policy.

Higher rents disproportionately affect housing affordability for those who struggle with securing adequate shelter for their families.

Thus, a preferred public policy response for affordable rental housing should not be a reliance on the market forces that will require the rents to rise before investment pours in.

Disclaimer and Acknowledgements: This blog post has been reproduced, with thanks, from The Financial Post’s Haider-Moranis Bulletin, courtesy of Murtaza Haider and Stephen Moranis, published on April  25, 2019.