Haider-Moranis Bulletin: While some markets might have started to recover, others still have to experience more moderation in sales and prices

A surprise jump in housing sales in greater Toronto in April is being interpreted in some quarters as a sign of a spring recovery in the housing market.

But market movements in other parts of the country have been much more nuanced, making any broad statement about a sustainable recovery impossible at this point.

The April figures were dominated by a spike in Toronto where sales increased from 7,159 units in March to 9,042 units. The average (nominal) housing price there also increased to $820,148. The last time average price crossed the $800,000 mark was in October 2018.

While the improved conditions were welcomed by most, the question of why sales and prices jumped — and whether those gains will continue through the summer — is still in need of an answer.

By contrast, sales continue to struggle in B.C. and prices in the urban housing markets in Alberta and Saskatchewan are now lower than they were five years ago. 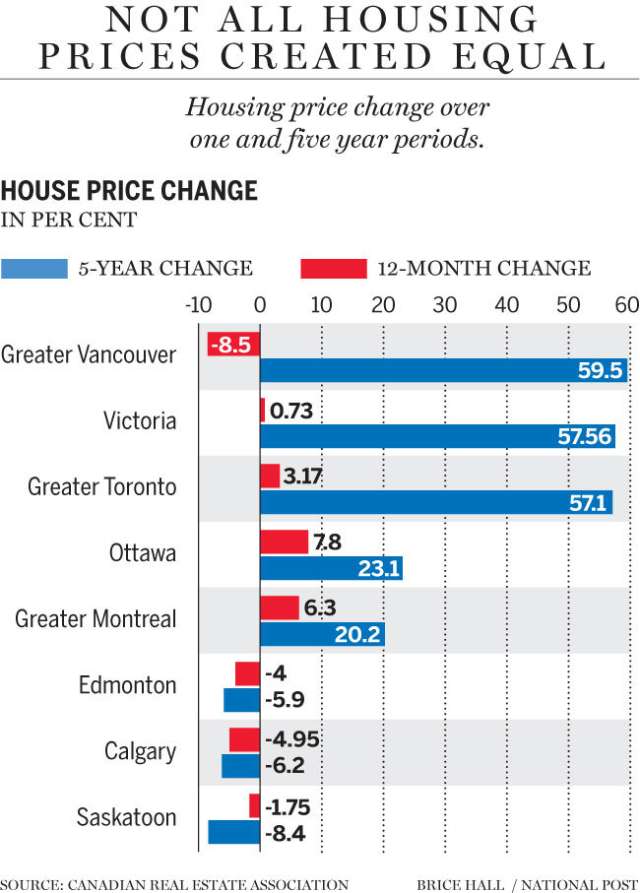 Housing sales in markets immediately east of B.C. were higher. Calgary and Edmonton reported modest year-over-year increases whereas sales jumped by 28 and 18 per cent in Regina and Saskatoon respectively. However, the smaller size of the prairie market means that it would only take a few hundred additional sales to significantly move the needle.

Despite the increase in sales, prices are declining in Alberta and Saskatchewan. Though the magnitude of the decline in prices is lower in comparison to the ones observed in B.C., the falling housing prices have lasted much longer in the prairies than elsewhere.

Consider that housing prices in B.C., despite the recent declines, are still 60 to 80 per cent higher than they were five years ago. It’s not the same for the markets in Alberta and Saskatchewan where prices in April were lower than the prices five years ago.

Housing markets in Ottawa and Montreal are distinct from other large cities. Not only have they reported modest year-over-year increases in April —7.7 and 6.3 per cent in Ottawa and greater Montreal respectively — prices have increased moderately over the five-year horizon. The HPI in April was 23 and 20 per cent higher over five years in the two cities.

Compared to the markets in Toronto and Vancouver, Ottawa and Montreal have avoided rapid price inflations that raised alarms about housing affordability. A substantial cohort of renters, which dominates the housing market in Montreal, has likely contributed to a modest increase in demand for owner-occupied housing resulting in a moderate increase in housing prices.

By comparison, Ottawa is likely to have benefitted from the large number of federal government employees who constitute a big part of the regional labour force and whose numbers and incomes are more stable, which prevents rapid demand shocks.

Across Canada, housing sales in April were up by 4.2 per cent year-over-year. The national HPI though faltered slightly by 0.3 per cent. Higher sales in April 2019 relative to the same month last year are encouraging, but come off a relatively low reference point: sales in April 2018 were the lowest for an April in the past seven years.

The diverse spectrum of housing outcomes in large cities indicates that local housing markets are not on the same cycle. While some markets might have started to recover, others still have to experience additional moderation in sales and prices.

While it is tempting to have a one size fits all policy response to housing market challenges, one runs the risk of compounding the problems for markets needing a custom response.

Tailoring regulatory interventions to address local market needs would be a better approach.

Disclaimer and Acknowledgements: This blog post has been reproduced, with thanks, from The Financial Post’s Haider-Moranis Bulletin, courtesy of Murtaza Haider and Stephen Moranis, published on May 23, 2019.